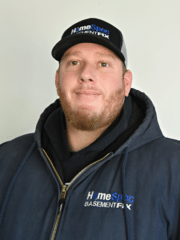 Travis was long-experienced in waterproofing before he joined the HomeSpec family two years ago. He is now certified in all things basement waterproofing, crawl spaces, and foundation repair.

Travis says he loves everything about his job - from his fellow crew members to the work being done. His daily duties include loading up the truck and driving to the home, then greeting the homeowners and going over the job that'll be done. Then he preps the job site and gets to work! He does this all while maintaining a positive work environment and "being awesome!"

In his free time, you can find Travis spending time with his wife and kids. They enjoy traveling, going on nature walks and cooking great food!