These homeowners purchased this home in Ann Arbor a little over two years ago, and quickly realized there was a problem with water seeping into the basement. The basement walls also had 8 cracks and 3 rod holes leaking, which is common for homes with poured concrete foundation walls. The previous homeowner attempted to fix this and had work done on the walls, but it didn't hold up.

One of the things you can do to prevent water from entering your basement is to repair your gutters. Their purpose is to collect water and funnel it away from the foundation so it doesn't pool around your home. These homeowners attempted that, as well as working on their drainage, but water was still getting in after heavy rains.

The solution we came up with was to repair the cracks and rod holes, and install a proper interior drainage system (IDS) in the basement. The cracks and rod holes were sealed with our high-pressure polyurethane sealant. This material is waterproof and flexible enough to move with the walls without cracking. The cracks were then reinforced with carbon fiber power grids to ensure they won't worsen over time.

The IDS was installed around the perimeter of the basement, and on top of the foundation's footer. With the drain being on the footer and not further down in the dirt/mud, it prevents clogging. The IDS collects any water coming in from under the floor or the walls, and funnels it away from the foundation via the sump pump.

These homeowners also decided to remove their water damaged carpet in the basement, and replace it with our faux-wood flooring that mimics natural wood floors. Since it's made from waterproof inorganic materials, they don't have to worry about mold or damage anymore. Now they have a waterproofed, finished basement! 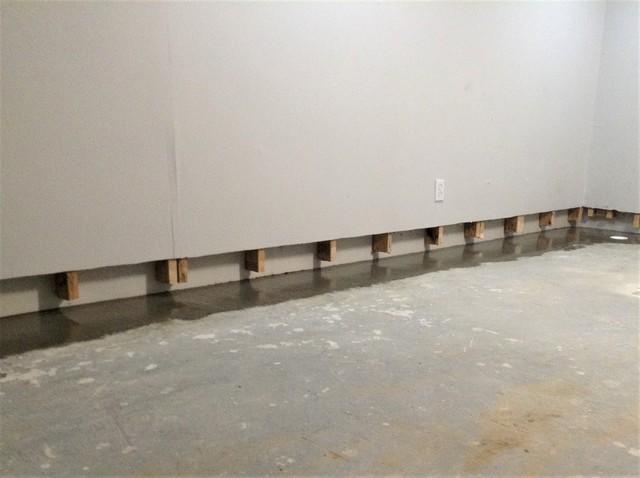 There's not a huge difference after the interior drainage system is installed. Drywall and flooring can easily be installed right over the system.