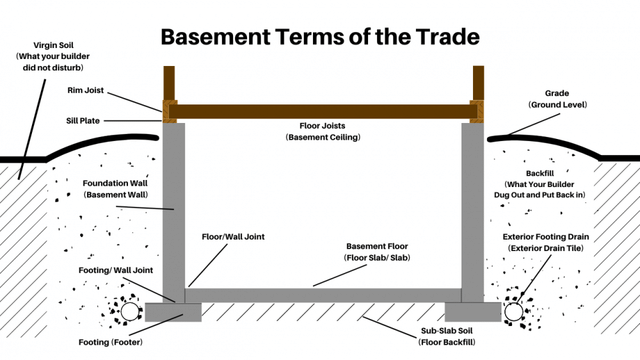 A customer once asked why we would waterproof his basement from the inside and not the outside. He figured it would be better to stop the water before it even got into the basement, rather than dealing with it after. This is true, preventing the problem before it even becomes a problem seems like the best option.

Sometimes exterior waterproofing is the best option based on the circumstances, but most of the time it's not

After seeing the extensive excavation needed to waterproof from the outside of the basement, most homeowners opt-in for interior waterproofing options like an interior drainage system (IDS) instead. You would have to excavate around the entire perimeter of your home—digging up the landscaping, concrete, porches—to be able to expose the basement walls.

This process is a messy and invasive task. Footing drains, which are placed in the dirt around the outer perimeter of the foundation, are also known to clog easily and be quite useless.

The biggest reason that exterior waterproofing isn’t the best option though, is because it only prevents water from getting in from the sides—it does nothing to prevent water from seeping up through the basement floor or the floor/wall joints.

This is where the IDS comes in and saves the day. Any water or water vapor coming in through the walls, windows, or the floor/wall joints, will be swept away by the IDS and taken to the sump pump, where it will be funneled away from the foundation.

Paired with a dehumidifier like the SaniDry Sedona or the SaniDry XP, the moisture levels in the basement will be completely under control.

To go even further and pair those with a vapor barrier for the walls, even water vapor won’t stand a chance getting in. Your basement will be like an exclusive night club where the IDS, humidifier, and vapor barriers are the bouncers—and the water definitely isn’t on the guest list.

Contact us today to get started on your journey towards a drier, healthier home!

Back to Previous Page
Back to News & Events
Related Categories: Waterproofing