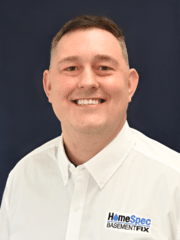 Keith has over 20 years of experience in the building and remodeling of residential homes. Keith has done everything from overseeing, budgeting and actually building foundations from the ground up. He has participated in our crew work and knows how to do things the right way. His main goal is always making customers happy.

Keith is professionally certified in basement, concrete and foundation repair. Additionally, he is a military veteran who served his country as an Army medic. He also has a degree in medical laboratory science.

Keith enjoys listening to audiobooks, cycling and boating on Torch Lake. Most of all, he enjoys spending time with his family and dog, Kona.

Walled Lake, MI Basement Floor Cracks Sealed...more »
Before and after photos from jobs I've worked on:
Back to Previous Page Back to Meet The Team